After deposing of Redlands United, Canberra Olympic have their sights set on a massive clash with Hyundai A-League opposition in the quarter-finals of the Westfield FFA Cup.

At a rain swept Deakin Reserve a penalty in either half – including the first goal from a goalkeeper in the Cup - saw the hosts progress to the last eight in a keenly contested Round of 16 encounter on Wednesday night.

With Redlands having beaten Adelaide United in the Round of 32, Olympic coach Frank Cachia is hoping his side will welcome A-League opposition to the capital following next week’s draw on Tuesday night.

"Imagine that, how good would that be?" he told the Canberra Times.

"[A-League clubs] are probably looking at it as a one in seven chance of drawing Canberra Olympic.

A crowd of close to 1,000 braved the harsh conditions as Futsalroos shot-stopper Angelo Konstantinou and Robbie Cattanach both converted from 12 yards to send a team from the ACT through to the quarter-finals for the first time. 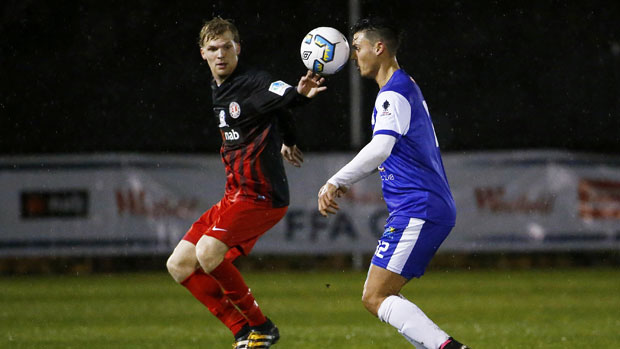 Cahill happy with run out for City

The result capped a memorable week for the club, having sealed top spot on the Capital Football ladder at the weekend.

Olympic will now have to back up against Tiger FC on Sunday for a spot in the Grand Final ahead of learning their Cup fate next Tuesday.

"Every win that we get is just a massive reward," said Cachia.

"That's what it's going to be like for the rest of the season."