Devonport City Strikers qualify for Australia Cup Round of 32

The Devonport Strikers proved too strong for South Hobart in the 2022 Lakoseljac Cup Final, storming to a 3-0 victory and in the process becoming the first side since South Hobart back in 2015 to successfully defend their Statewide Cup crown.

A brace from Roberto Fernandez Garrido, who would go on to be named Player of the Match, following Ali Dulleh’s opener right before halftime helped delivered the Silverware to the Strikers in a match they were pushed early on in, but simply ran out the stronger, comfortably overrunning South Hobart in a dominant second half.

In many respects, this was a most typical Striker’s performance. They were highly disciplined and organised whilst bringing a tough physical edge and getting the better of the aerial duels. It was a game where chances were hard to create and space was always at a premium, but the longer the contest wore on, the better Devonport looked as they just wore their opposition down before delivering the knockout blow in the second half.

Much like the last time these sides met, the first half was a largely cagey affair and led to very few scoring chances. Both sides only really created the one chance of note for most of the first half, with Bidwell blazing one over the bar for Devonport after a dangerous scramble in the box and Van Doorne drawing the only real save from either keeper of note when he tested Smith from long range.

With scoring chances so few and far between, the game appeared set to head into the break locked at 0-0 but that would all change in the shadows of halftime, as Devonport broke the deadlock, albeit somewhat fortuitously.

Joel Stone crafted it in sublime style, the star playmaker threading a through ball on his non-preferred left foot from the centre circle that split the two centre backs and sprung Ali Dulleh in behind. Toby Herweynen lunged with a despairing attempt to get a foot to the ball before Dulleh could pounce on the chance, but he succeeded only in clearing the ball onto the swinging right foot of Dulleh and it deflected through the legs of the keeper for the game’s opening goal.

It was an enormous moment in the match that would have shifted the halftime team talks drastically. South were now going to have to chase the game and perhaps open themselves up as they went in search of an equaliser whilst Devonport were now just 45 minutes away from victory so long as they didn’t concede.

The South Hobart response after halftime was a strong one and they had the better of the early chances in what would prove their best 10 minutes of the game. Josh Divin drew a good save from Keegan Smith with his headed effort before Lachie Semmler fizzed a shot just wide of the post a minute later. The South Hobart belief was growing and the Strikers found themselves on the back foot for the first time all afternoon.

But the Strikers are a side who seem to get better the longer games are on and so it proved here as they struck twice midway through the half to kill off the game off and secure the victory.

On 65 minutes Charles Bidwell won the ball back in his own half from Van Doorne as he tried to take it past him wide on the right before launching a long ball over the top for Fernandez Garrido to run onto into the right-hand side of the box. The Spaniard then cut back inside sharply, sending Luke Bighin to the ground and giving him time to pick his spot with a composed left-footed finish.

Last week against Knights the Strikers remarkably scored just 11 seconds after the restart from a goal that arrived midway through the second half and this week they repeated the trick, winning a penalty just 34 seconds after South had kicked off again.

Dulleh took the ball wide on the left and drifted into the box, weaving between defenders before being body checked by Loic Feral and sent tumbling to the deck. Brenton Kopra had no hesitation pointing to the spot and Fernandez Garrido just snuck his penalty home to all but ice the game at 3-0.

This Strikers outfit have conceded five times all year, so they were never going to lose from this position and the body language of both sides told the story, that this game was over. There would be no further scoring as it largely fizzled out from there and Devonport secured their fourth Lakoseljac Cup in 7 years with the 3-0 win. 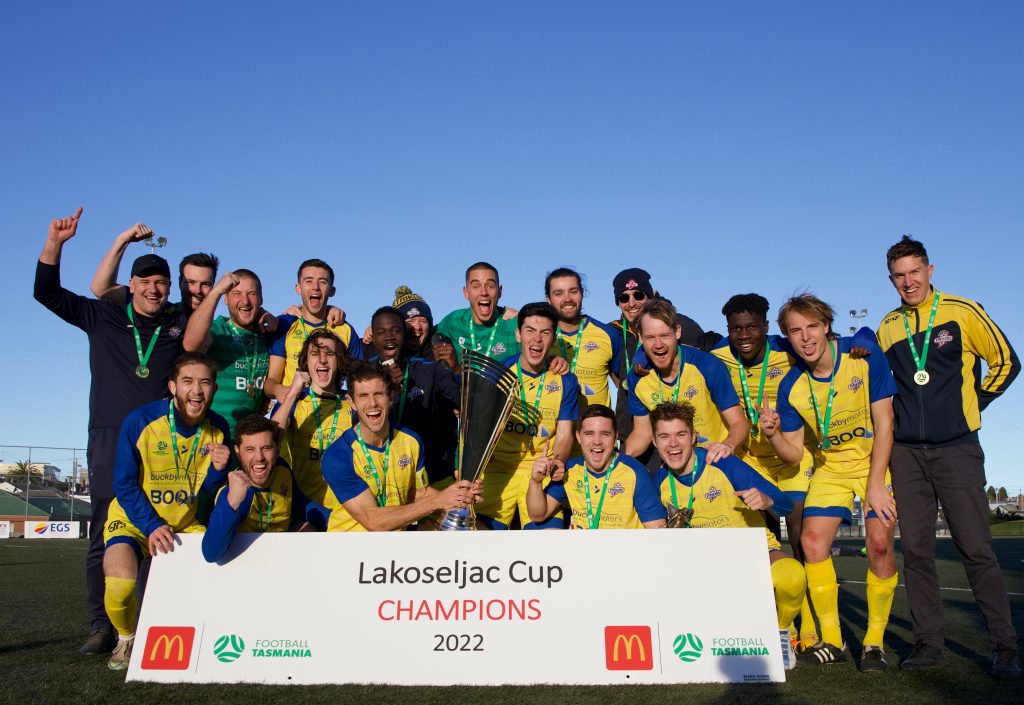 In his post-game victory speech, Captain Kieran Mulraney paid credit to the hard work of the side and was clearly proud of the performance his side produced.

“Today we showed what we can do when we turn it on. It doesn’t just happen, the hard work we put in pre-season, at training 3 nights a week, travelling to games. You boys work so hard and this was a just reward.”

The 3-0 win makes it 4 Lakoseljac Cup victories in the last 7 seasons for the side from Valley Road who have well and truly forged a dynasty at this point. Their latest triumph will see them returning to the National Stage in the Australia Cup Round of 32 later in the year, a competition they have already had success in, famously winning games over highly fancied opposition in both 2016 and 2018.

Quest to crown Australia's Cup best to continue on 21 July

The match schedule for the Australia Cup 2022 Round of 32 was released by Football Australia today, with four matches featuring eight Member Federation clubs headlining the first of six scintillating matchdays in this phase of the nation's largest annual knockout sporting competi

Magpies Crusaders United have secured the final 2022 Australia Cup Round of 32 berth courtesy of a 5-0 win over Edge Hill United at Tiger Park on Saturday night. Morgan Saunders scored a brace while further goals from Michael Lyall, Diego Cuba and Angus Mckenzie saw the Mackay

For the second time a spot in Asia awaits this year's Australia Cup Champions. The Australia Cup winners will be granted one of Australia's slots in the AFC Cup Group Stage*, meaning clubs from all levels of the Australian football ecosystem can aspire to compete against top s