Tim Cahill made his City debut in Brisbane while the Cup thrilled big crowds in Canberra, Sydney and Melbourne as four teams booked their spots in the quarter finals.

Tim Cahill’s Melbourne City career has got off to a winning start as they held off a stubborn Brisbane Strikers 2-1 at a sold-out Perry Park in the Westfield FFA Cup Round of 16.

City fell behind to a Greig Henslee goal but two penalties from skipper Bruno Fornaroli proved enough to get the Hyundai A-League club through to the quarter-finals. 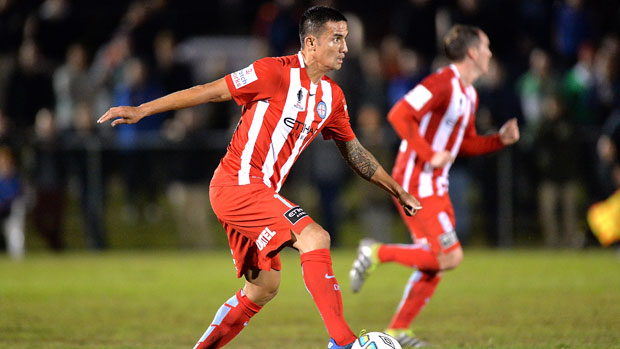 Most eyes were on Cahill and the Caltex Socceroos star came on for his City debut just after the hour mark to a generous ovation from a new Strikers ground record crowd of 3571.

Despite surrendering most of the possession, the Strikers were creating the better opportunities and deservedly went ahead on 34 minutes.

No one picked up Henslee from Hiroki Omori’s free-kick, with the defender slotting past a helpless Thomas Sorensen from close range.

But Henslee went from hero to villain three minutes later as his mistimed lunge in the box brought down Nick Fitzgerald and Bruno Fornaroli made no mistake from the penalty spot.

A cracking Cup tie saw both sides create chances after the break but the game swung in City’s favour 13 minutes from time when Bruce Kamau surged into the box and was tripped up by Jake Marshall.

Fornaroli stroked his penalty down the middle to give City the lead which they wouldn’t surrender on what was a magical night in Brisbane. 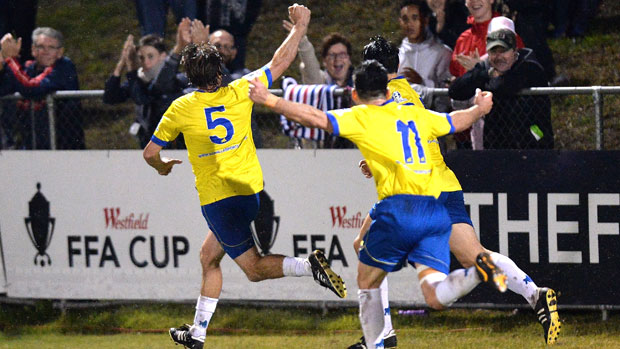 On a wet and wild night in Seven Hills, Blacktown stormed home in the western Sydney derby to progress to the quarter-finals in style.

The attacking duo of Danny Choi and Patrick Antelmi caused all the damage at Lily’s Football Centre as City dominated this clash.

After his hat-trick against Sydney United 58 in the Round of 32, Antelmi was on hand to meet Choi’s ball across the goal before guiding it back across and past Eagles keeper James Chronopoulos on 22 minutes.

Choi, the hero of the Round of 32 for City with his wonder-goal, was a constant danger but City were unable to add to their score by the break.

But add to it they did with former Western Sydney Wanderer Joey Gibbs bending his set-piece home to double the lead.

Eagles hit back immediately almost dragging a goal back but Aaron Peterson’s shot hit the bar.

Choi continued to threaten for City as the game entered its final 30 minutes and it was his partnership with Antelmi which reaped a third. A perfect curling cross from the left found his strike partner and it was guided home to all but seal the win. 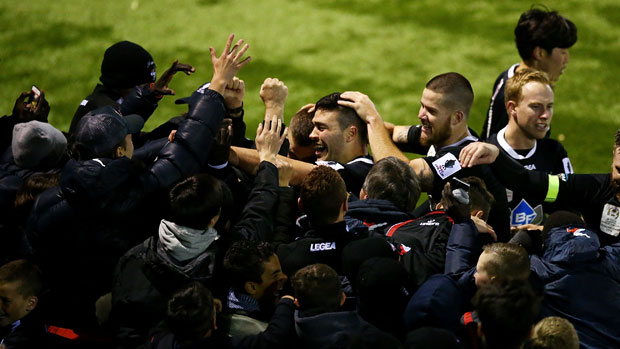 Berisha became the first player to score 10 goals in FFA Cup history when he sent goalkeeper Chris Oldfield the wrong way in the 27th minute, while the goal also ended Hume's perfect run at home in the competition. 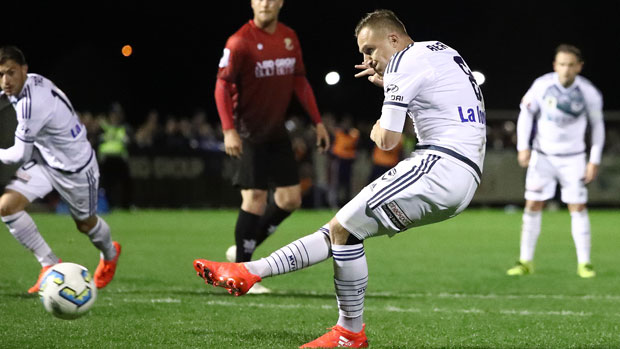 In a rematch of last year's FFA Cup semi-final, Victory started sharply and took the lead after Fahid Ben Khalfallah was tugged back in the box by Hume full-back Jeremy Walker.

Berisha made no mistake from the spot and the home fans' frustration was exacerbated when Hume had two penalty shouts turned down before the break.

In the 32nd minute, Tom Cahill's shot was blocked but referee Shaun Evans ignored calls for handball, while 11 minutes later, Ramazan Tavsancioglu was furious when he appeared to be knocked down in the box by Alan Baro.

Hume had the better of the second half as captain Nick Hegarty got more involved but the hosts were unable to find the back of the net in front of a vocal crowd of 2,866 as Victory moved into the quarter-finals. 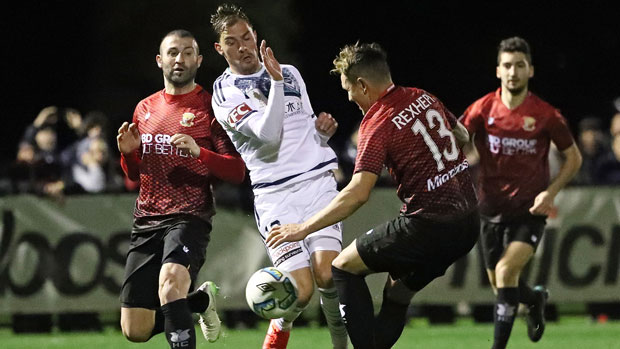 Canberra Olympic has booked a place in the last eight of the Westfield FFA Cup with a penalty in each half delivering a 2-0 win over Redlands United at a chilly, rain sodden Deakin Reserve.

The visitors, fresh from their win over Adelaide United in the Round of 32, started the contest strongly but were undone at the back when Robbie Cattanach was fouled in the box by Redlands skipper Michael McGowan.

Olympic’s goalkeeper and captain Angelo Konstantinou duly stepped up to take the spot kick, with the Futsalroos shot-stopper slotting it straight down the middle to open the scoring.

Matt Chandler’s side looked to respond almost immediately with a chance in the box falling to Igor Sao Jose, but the winger hit his half-volley just over the crossbar.

Instead the Brisbane outfit had their goalkeeper to thank for not falling further behind, with Brendan White pulling off a couple of clutch saves to deny Olympic’s Colombian striker Philippe Bernabo-Madrid.

Redlands were full of intent in the second stanza and went close to drawing level in the dying stages following a goal line scramble.

However a second penalty in added time, won and converted by Cattanach sealed their fate with the Capital Football champions becoming the first side from the ACT into the FFA Cup quarter-finals.